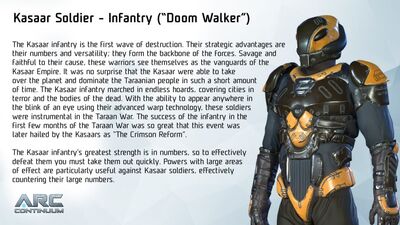 Kasaar Soldier - Infantry is a character in Arc Continuum.

The Kasaar infantry is the first wave of destruction. Their strategic advantages are their numbers and versatility: they form the backbone of the forces. Savage and faithful to their cause, these warriors see themselves as the vanguards of the Kasaar Empire. It was no suprise that the Kasaar were able to take over the planet and dominate the Taraanian people in such a short amount of time. The Kasaar infantry marched in endless hoards, covering cities in terror and the bodies of the dead. With the ability to appear anywhere in the blink of an eye using their advnaced warp technology, these soldiers were instrumental in the Taraan War. The success of the infantry in the first few months of the Taraan War was so great that this event was later hailed by the Kasaars as "The Crimson Reform".

The Kasaar infantry's greatest strength is in numbers, so to effectively defeat them you must take them out quickly. Powers with large areas of effect are particularly useful against Kasaar soldiers, effectively countering their large numbers.