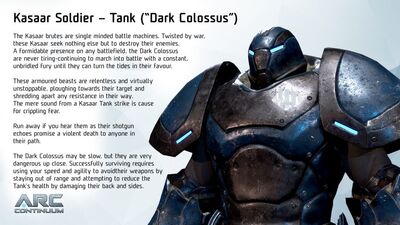 Kasaar Soldier - Tank is a character in Arc Continuum.

Also known as the "Dark Colossus".

The Kasaar brutes are single minded battle machines. Twisted by war, these Kasaar seek nothing else but to destroy their enemies. A formidable presence on any battlefield, the Dark Colossus are never tiring - continuing to march into battle with a constant, unbridled fury until they can turn the tides in their favour.

These armoured beasts are relentless and virtually unstoppable, ploughing towards their target and shredding apart any resistance in their way. The mere sound from a Kasaar Tank strike is cause for crippling fear.

Run away if you hear them as their shotgun echoes promise a violent death to anyone in their path.

The Dark Colossus may be slow, but they are very dangerous up close. Successfully surviving requires using your speed and agility to avoid their weapons by staying out of range and attempting to reduce the Tank's health by damaging their back and sides.